On Monday, the Lady Chargers were able to overcome poor shooting (29%) and rebounding (out-rebounded by 10) to sneak by the College of Southern Idaho with a first round win. As they prepared to take on #4 seed and nationally 5th-ranked South Plains in Round 2, they knew they had to do better in both areas. Unfortunately for team, the shooting and rebounding woes that plagued them on Monday did not improve. The result was a 49-65 loss in the Sweet 16 of the NJCAA National Tournament in Lubbock, TX.

Things looked promising early in the game for GHC. They hit their shots and opened up a 4-point lead in the 1st quarter. South Plains fought back and after a back-and-forth quarter, SP lead GHC 17-15. Things stay close early in the 2nd but then the Lady Chargers’ shooting went cold. They were outscored 9-16 in the 2nd quarter, allowing the Lady Texans to open a 33-24 lead heading into halftime.

Any hope of a comeback was dashed in the 3rd when the Lady Chargers scored only 7 points total and fell behind by 33-47. South Plains pushed the lead to 19 early in the 4th quarter and cruised the rest of the way.

The Lady Chargers finished the season 21-4 (all 4 losses coming to nationally ranked teams), a regular season GCAA title, and a GCAA tournament runner-up finish. Additionally, the Lady Chargers swept the conference honors by winning Freshman-of-the-Year, Player-of-the-Year, and Coach-of-the-Year. While not the finish the team wanted, the season was one of the most successful in program history. 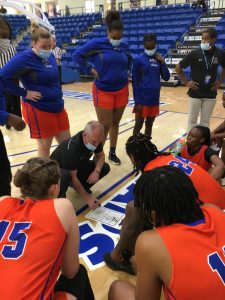